RCB vs RR Match Summary : It was a match where rain played the actual prank with the players, fans and the spectators as for most of the time the game was delayed due to heavy rain at the Chinnaswamy stadium. 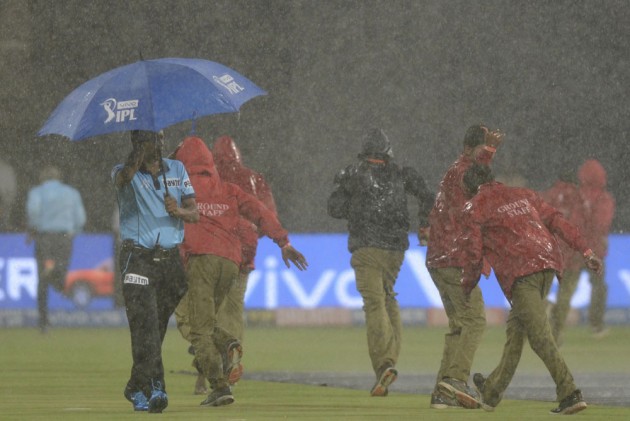 And when the rain stopped both the teams decided to play 5 over game as much time was lost. RCB opened the innings and both Virat Kohli and AB De Villiers started smashing the ball from the word go.

But AB De Villiers was dismissed at just 10, followed by Marcus Stoinis at golden duck. But Virat Kohli kept tight at one end and scored gutsy 25 runs of just 7 balls that included 3 sixes and one four. In the end RCB was restricted to 62/7 in 5 overs.

In the process Shreyas Gopal took the second hat-trick of the tournament after dismissing Virat Kohli, AB De Villiers and Marcus Stoinis off consecutive deliveries.

After the emphatic drama Rajasthan Royals came on to bat and Sanju Samson and Liam Livingstone started smashing RCB mediocre bowlers and reached 41/1 in just 3.2 overs, but then again rain came into play and both the team have to settle with equal points.